CCF form comes in 2 variants depending on whether you have linked you Aadhaar number with EPF account or not.

Another important point of CCF form is that members can use self certification for advance (partial withdrawal) and don't need to submit supporting documents. Earlier for example, for advance in case of marriage, one had to submit marriage card - this is no longer required. Similarly one need to only submit self declaration form for house construction or alteration in existing house.

CCF Aadhaar form (Composite Claim Form Aadhaar) is for those EPF members who have linked their Aadhaar number and bank account details with their EPF account.

CCF Aadhaar form does not require any attestation from employers and thus is the simplest way to withdraw or take advance (partial withdraw) from your epf account. 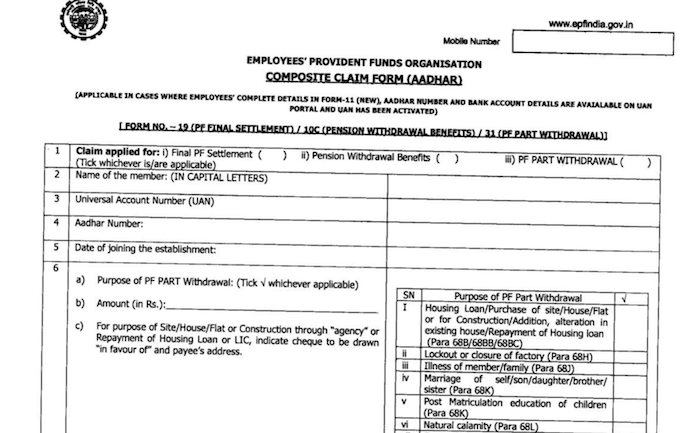 CCF Non Aadhaar form (Composite Claim Form Non Aadhaar) is for those EPF members who have not linked their Aadhaar number with their EPF account.

These members can use CCF Non aadhaar form now and need to get their form attested by their employer before submitting it to EPFO.

We strongly recommend EPF members to get their Aadhaar and bank account details linked with their epf account as this will remove un-necessary hurdles faced by members. Once you have linked your Aadhaar number, you don't have to rely on your employer to get you hard earned money. It is especially important for people working in small companies because sometimes company closes and it becomes impossible to get employer attestation for epf withdrawal later.